FeiyuTech G6 Plus – test of inexpensive gimbal to mirrorless

We test FeiyuTech G6 Plus . This is one of the cheapest gimbals on the market, intended for smartphones and sports cameras, but also mirrorless. Is it possible to buy a gimbal for PLN 800 for stable shots? About this in our test.

At fotoManiaKu we have already tested a few gimbals from FeiyuTech. Among other things, FeiyuTech a2000 and its successor – FeiyuTech AK2000. Both intended for cameras. They offered considerable lifting capacity and worked well. Today, we take the FeiyuTech G6 Plus , which is one of the cheapest models of the manufacturer. Its unique feature is that it can work with a smartphone, a sports camera, but also a camera. However, can gimbal for PLN 800 provide stable shots taken with the camera? About this in our review.


FeiyuTech G6 Plus is a very small gimbal

Anyone who is used to classic gimbals for cameras will be surprised by the dimensions of the G6 Plus, because it looks almost like a toy. It is very small, has a thin handle, small motors and weighs less than 700 grams together with a battery . At first glance, therefore, it reminds you of a model that can lift a smartphone and a tiny webcam, but the camera probably does not. Dimensions can be noted as a plus. It's a very handy device that weighs so little that keeping it in your hand all day will not be a problem. In addition, it can easily fit even in a small backpack or bag – it is ideal for taking it with you on the road. The more expensive models of the manufacturer are gimbals with large dimensions and we will not be able to stuff them into a backpack – unless it is really big. 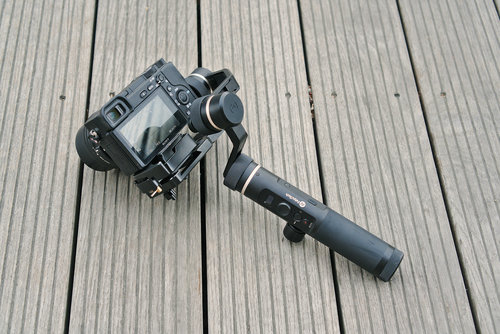 We get Gimbal in a special case, which, although it is stiffened, but the stronger pressure makes the surface concave, so do not count on strong security. It's nice, however, that the suitcase is , because it is certainly good to use it during the transport of gimbal. in the middle, in addition to gimbal, we will not find much. There are connectors that allow you to attach a sports camera, but there is no smartphone or, even worse, quick connectors. This works in the Arca Swiss system , so it is quite universal – it is easy to buy and often the heads in tripods and monopods also use this system. The fact is, however, that we will have to buy such quick coupler, because it is not included in the set. 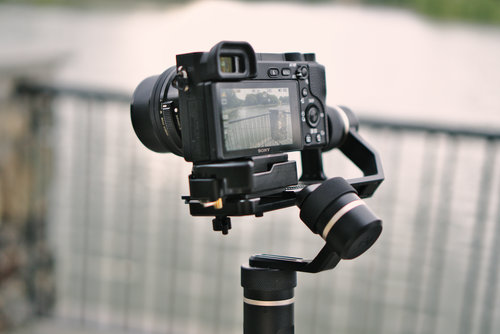 There is also no external charger, and instead we get a not too long micro USB cable. You can charge the battery directly in the gimbal. Interestingly, this model is powered by only one battery – ICR26650 with a capacity of 5000 mAh. I have exchanged everything that we find in the set. Well, almost, because there is also a manual – written in Polish, but rather laconic. A better source of gimbal knowledge is the producer channel on YouTube, where you can find a lot of instructional videos. The handle of the gimbal was covered with a smooth rubber, the rest of the casing covered with matte metal of black color with small accents in the form of silver strips. Part of the housing is occupied by buttons and knobs, which are really many. There was also a small digital screen.

The number of buttons may be surprising, because it would be enough to use a switch and a joystick to control it. Meanwhile, here, in addition to the two, you will also find the REC button forward, one button and the lever in the back, the next button on the right side and the knob on the left. There is really a lot of it, so you need a moment to get to know each other. 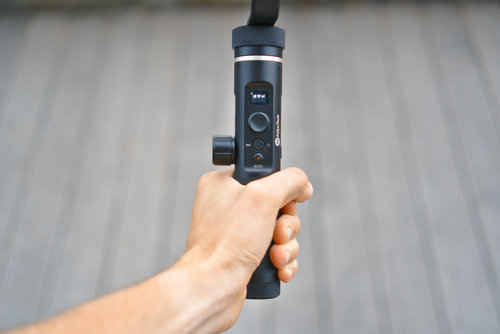 The camera is turned on with the button on the front, which also changes the modes. To turn on the gimbal, we have to hold the button for a few seconds – after a while, we hear a pause and see a charging screen. Gimbal is ready to work. Similarly, in the case of switching off – we have to hold down the button for a few seconds and the whole process is accompanied by a ping. If anyone knows how to turn this off – I will be grateful for the information, because I did not succeed. There are 3 modes available: HF, LK and AF. The first one starts immediately after activating the gimbal and blocks the Roll and Tilt axes, leaving the Pan axis active. This provides us with the possibility of moving right and left. Pressing the Mode button once activates the LK mode, in which all axes are locked. In turn, pressing twice activates the HF mode, in which the gimbal follows the movements of our hand in each axis. 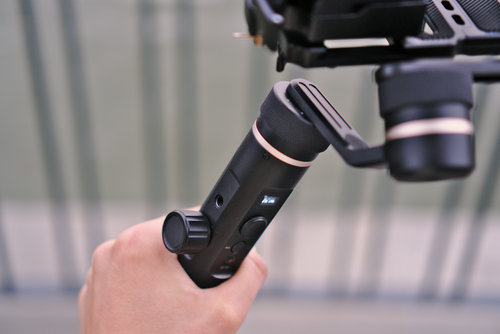 In addition, in each of the modes is active joystick, which allows you to freely control the camera vertically or horizontally. In the vertical, the range of movements is 270 degrees, horizontally 360. There is also a knob available. After activating it, we can control the camera or gimbal. In the case of gimbal, the knob gives the possibility to control each of the three selected axes. Unfortunately, neither the joystick nor the knob, in my opinion, give me enough smoothness of movement, which in effect is somewhat jerky. 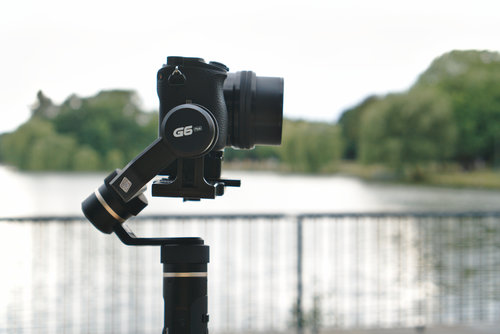 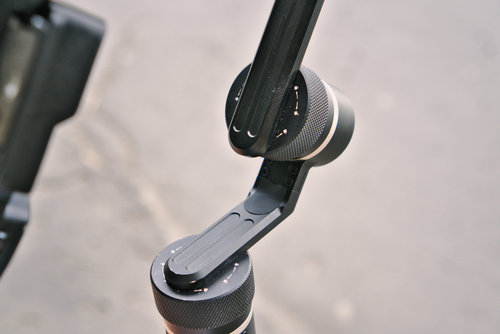 At the back, more or less at the point of the index finger, there is a lever that allows you to tilt the camera right or left 45 degrees. In addition, the gimbal has buttons with which you can control the camera – including the REC button used to start recording, or operating as a shutter release in photo mode. The knob also allows you to operate the camera – zoom or can act as a follow focus. The camera control functions described above sound great, but in practice fall out on average. Zoom works with selected models, but does not provide slow, smooth motion. In turn, follow focus is active only for a few CDs, mainly Panasonic, so most users will not take advantage of this option.

After describing the possibilities and functions of the camera, it is time for the effects of working with the device. I attached the Sony A6300 to the G6 Plus with a kit lens – it is one of the sets recommended by the manufacturer, so one with which he should work without any problems. The camera has a lifting capacity of 800 grams, and the set chosen by me is not even 600, so we have quite a good supply, which is important, because the gimbal works best when it is not fully loaded. The first thing is to attach the camera. I suggest you buy a mounting plate on which you can move the screw to the right and left, because the plate with the screw in the middle can make the camera so pinned will not fit on the gimbal, because it will be too wide. There is not much space. Then the camera should be balanced. The ideal balance is one in which the camera in each of the axes is held at ease and does not fall. In practice, achieving this effect in the G6 Plus gimbal is almost impossible. The axis range is too short for the camera to be perfectly balanced. You can do it reasonably well, but not perfectly – at least I did not succeed. Gimbal, of course, even without perfect balance, will work, but losing more energy and providing less stability. 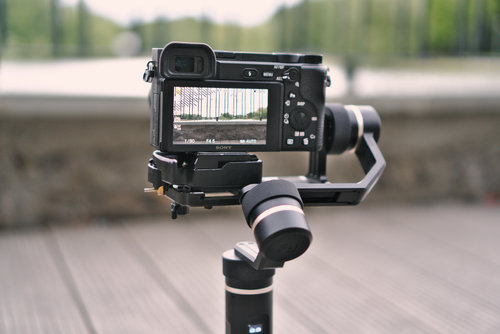 Let's move to the issue of device operation. Does gimbal ensure stable and smooth work? It depends on what our expectations are. Forwards and backwards movements with the HF or Lock mode on will ensure smooth shots that resemble camouflage. Worse, when we want to get more demanding movements. A shot with a camera that rises to the top or falls down, spinning around a particular object – all these movements make a big impression on the viewers. Unfortunately, for this model, all those requiring movements will not be smooth enough. When the camera falls, at some point the gimbal turns slightly right, practically every time. This microscope makes the shots not performed – unless with the help of a joystick, which, as already mentioned, also does not guarantee adequate fluidity, because it is too sensitive. 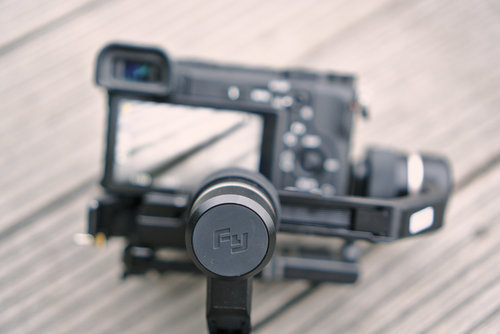 The problem is also every move, in which instead of tread carefully we will run or step harder. In this situation, micro-projections will be noticeable, as well as the fact that the camera will move slightly to the right and left. The problem in my opinion is that the gimbal is too sensitive – every twist of the hand, or slight movement affect the rapid movement of the gimbal , which results in the fact that we lose liquidity and the shots are torn. I also noticed that the G6 Plus tends to be slightly lowered , so the camera moves slightly to the right. Of course, this can be corrected using the back lever, but the gimbal itself should keep level. I am considering all the charges I am writing about treating gimbal as a potentially professional tool for a filmmaker. However, if you look at the model from the point of view of filmmaker, you can turn a blind eye on many issues. G6 Plus gives stable shots, it is ideal for vloggers. If necessary, it will replace the tripod, guaranteeing smooth panning, it will also replace the slider – we can film it low above the ground. However, if you are looking for the perfect liquidity, it is worth being interested in another, more expensive model. At the end of the words, a couple should be a mobile application. This allows you to wirelessly control the gimbal, as well as adjust some of its parameters to our needs. Unfortunately, the quality of the connection is not the best – the changes sometimes work late, and errors often appear. In general, it does not do well, but thanks to it, at least we can change settings without having to connect the gimbal to the computer. 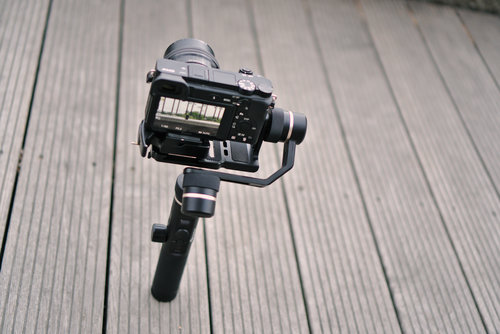 FeiyuTech G6 Plus is a non-standard gimbal, because it is a 3-in-1 device. We can attach to it a smartphone, a sports camera, but also a camera. For this reason, the device can become an ideal travel companion, especially for vloggers. Its small size and relatively long working time (up to 9 hours, in practice no more than 8) make the device work well in the case of amateurs. If you are looking for the first gimbal to the camera, it is worth considering the purchase of G6 Plus, which is currently the cheapest offer available on the market – costs less than PLN 800 . If, however, you have already dealt with gimbals and you expect perfectly smooth movements, it will be worth paying a few hundred zlotys more and buy something better. [Show_rating]