At the moment we were waiting impatiently. The Japanese presented a camera that many people love naturally. The latest Sony α7R IV (model ILCE-7RM4 ) has the highest resolution of all digital cameras manufactured so far by Sony. It goes hand in hand with a large dynamic range, an excellent AF system, high speed continuous shooting and many other advantages.


Sony α7R IV in a nutshell

We are constantly innovating, breaking barriers and improving the standard of operation of a digital camera. The new α7R IV combines the image quality of medium format cameras with high speed images, instant focusing and a long list of improvements in design, connectivity and functionality. This will allow professional photographers, filmmakers and other creators to register images that were previously impossible to obtain. – says Yann Salmon Legagneur, director of product marketing at the Digital Imaging department of Sony Europe.

The α7R IV camera is equipped with a newly developed full-frame BSI image sensor CMOS image sensor with a resolution of 61 megapixels . This is the first system of its kind in the world. The combination of BSI technology and efficient noise reduction techniques translates into extremely low noise and maximum possible image quality. The 15-degree dynamic range ensures smooth, natural tonal transitions, from deep shadows to the lightest parts. 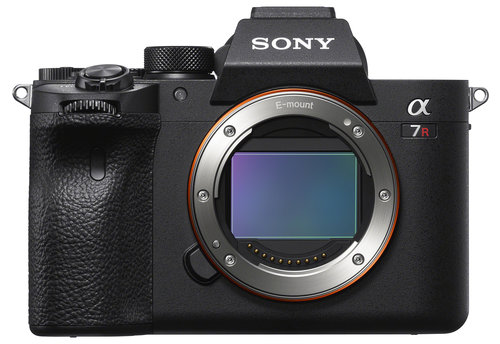 The new model uses a 5-axis optical image stabilization system optimized for use with high resolution images. It allows the shutter speed to be extended by up to 5.5 degrees. The modernized shutter assembly now prevents the slightest movement of the body that could result in image blur. The distinctive feature of the α7R IV body is the OLED Tru-Finder viewfinder 's highest resolution in the Sony camera family . It is 5.76 million pixels – about 60% more than the Sony α7R III. The new viewfinder accurately and faithfully captures the composed scene. The user can adjust the display quality to the type of scene and the prevailing conditions by selecting the "Standard" or "High" setting and refresh the image at 60 or 120 fps. The Pixel Shift Multi Shooting mode has also been improved, currently up to 16 full-resolution images are recorded. During their performance, the camera moves the sensor by 1 pixel or 0.5 pixel, resulting in 16 mutually shifted images with a total of 96.2 million pixels. These photographs can later be transformed into one image composed of 240.8 million pixels (19 008 x 12 672) using the Imaging Edge computer program. This mode is ideal for photographing architecture, works of art and any static objects. https://www.youtube.com/watch?v=lwwzM81k5VE


The speed of shooting and focusing

In full-frame mode, at full resolution and selected JPEG or RAW format, you can take pictures at up to 10 fps for up to 7 seconds – with full, precise auto focus and exposure. In APS-C mode, where the resolution is 26.2 megapixels, the time is about 3 times longer. As a result, fast-moving objects can be captured on extremely accurate and detailed photos. Another improved element of the α7R IV is a focusing system with 567 AF fields with phase detection covering approximately 74% of the imaging area. They are complemented by 425 AF points with contrast detection, enhancing accuracy and reliability in low light and other situations where contrast detection works best. More densely packed AF points on the matrix and advanced algorithms significantly increase the efficiency of tracking, also in the case of irregular and sudden movements of the object. The α7R IV is equipped with real-time, artificial intelligence system Real-time Eye AF . It detects the eyes and in real time analyzes their position, providing maximum sharpness. This function can be used both when photographing people and animals – the right mode of operation is chosen in the menu. The Real-time Tracking system, used to track objects in real time, now uses a new object recognition algorithm that guarantees their optimal tracking and maximum accuracy of the AF system. The user can also enable the mode in which the camera automatically detects the presence of fluorescent lamps and other artificial light sources to compensate for the effect of their flickering on the final image.

The α7R IV body allows the use of many advanced communication functions that improve work in professional applications. It works with wireless networks – both in the standard 2.4 GHz band and newer 5 GHz band, providing faster and more stable data transmission. A novelty in the Sony cameras is the function of wireless remote control from the computer (wireless tethering), lack of which was indicated by many professional users. Thanks to it, the buyers of the α7R IV model will gain greater freedom of movement in the studio and on the set. In addition to the fast Wi-Fi connection and the function of wireless communication with the computer, the camera has a SuperSpeed USB connection (USB 3.2 Gen 1) with a USB Type-C socket . It enables wired data transmission at very high speed – when using Imaging Edge it is almost twice as high as in the case of the α7R III model. The camera also supports FTP transmissions in the background. This means that you can send images to a remote FTP server while shooting and checking images. Sony has also announced version 2.0 of computer programs from the Imaging Edge suite: Remote, Viewer and Edit. The "Remote" program is used for remote control of cameras and live image preview on a computer screen; "Viewer" is a tool for quickly viewing, classifying and selecting photos from large libraries, and "Edit" allows you to convert RAW data into high quality final images. It was also possible to send images to a smartphone even when the camera is turned off . This feature will be available to Sony Imaging Edge Mobile users in the latest version.

The α7R IV also works well as a serious tool for film production. It allows you to record a 4K image (3840 x 2160 pixels) , and in Super 35mm mode it reads all pixels without combining them into groups, so that the recorded 4K movie footage has exceptional detail and depth. The S-Log 2 and S-Log 3 curves help in achieving maximum flexibility with later color correction. The second one allows the use of a full 14-degree dynamic range. There is also an HLG (Hybrid Log-Gamma) curve, enabling the use of the α7R IV camera in the Instant HDR work organization system. 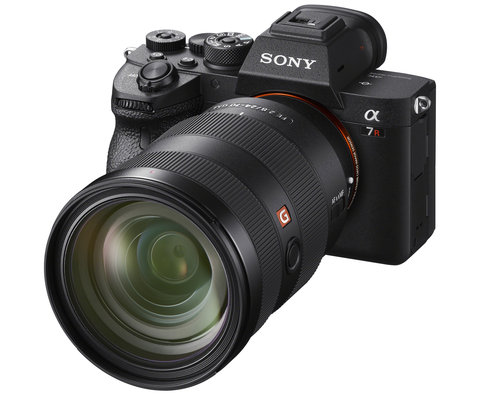 The enhanced Fast Hybrid AF system is responsible for focusing during filming. It works faster, smoother and more stable – even if the main motif is temporarily obscured by the moving object. In turn, the "Touch Tracking" function allows you to focus on the object being filmed by touching it on the screen. α7R IV is the first Sony model in which the Real-time Eye AF system also works when recording a movie . After activating it, the camera keeps the focus on the person being filmed reliably and reliably, allowing you to focus on filming. The Eye AF function will be activated automatically when the person is indicated with the "Touch Tracking" function. A significant improvement for filmmakers is enriching the Multi Interface Shoe (MI) foot with a digital audio interface . It allows direct connection of the new ECM-B1M directional microphone or XLR-K3M XLR adapter kit to produce clear, high-quality and low-noise sound. Among the other functions for filming, it is worth mentioning the interval recording mode for creating stop motion animations, recording Full HD image at up to 120 fps and the functions of slow and accelerated pace.

In the α7R IV body various constructional and functional improvements have been introduced – in many cases under the influence of the suggestions of people whom Sony equipment is used for professional work. 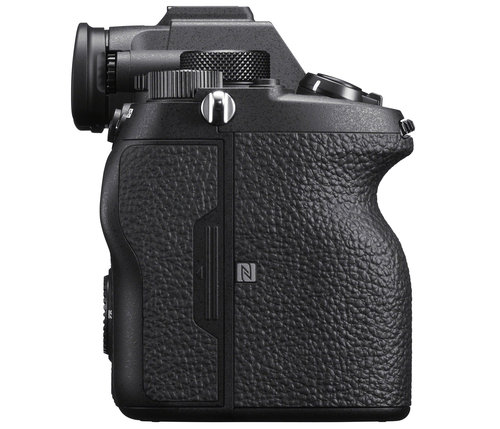 For the α7R IV instrument to be as durable as possible, it is even better protected against dust and moisture . In addition, all connections between the elements of the body were sealed, as well as the cover of the battery chamber and the media receptacles. The device is made of extremely light and durable aluminum alloy. An improved, very solid fastening with six screws was also used. Other improvements include a modified grip for more comfortable and firm grip of the camera, a larger and more responsive AF-ON button, a newly designed joystick , a button to lock the exposure compensation knob, and the shape and position of the rear dial. Also new are two data carrier slots compatible with UHS-II, which many professional users lacked. They will increase the overall capacity as well as read and write speeds. 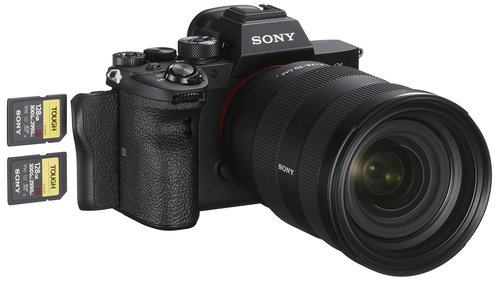 The range of saved camera settings has expanded: Currently, a copy of almost all parameters can be created on the memory card so that you can load them in the future. One card is enough to save 10 combinations of settings. They can be loaded into any body of the same type. Although the number of pixels increased by 50%, the battery performance also increased. When measured in accordance with the Camera & Imaging Products Association standard, one charge is sufficient for up to 670 images (using an LCD monitor, 530 images using an electronic viewfinder). Further extension of working time can be achieved with the new VG-C4EM vertical photo-sold holder, which holds two NP-FZ100 batteries, and separately sold NPA-MQZ1K battery power supply with space for four Z-type batteries. adapted to power via USB.

Sony also introduces a number of new accessories that complement the α7R IV body. These include: Vertical picture holder VG-C4EM : it has the same operation, handling, appearance and properties – including greater resistance to dust and moisture – as the α7R IV body itself. Twice extends the work time without charging and allows the battery to be charged via the USB connection via the camera body. The ECM-B1M directional microphone : eight high-performance microphone capsules and advanced digital signal processing allow you to get three different, strongly directional characteristics from a single microphone with a length of about 99.3 mm. After installing this device in the Multi Interface foot with a digital audio interface, sound transmission to the α7R IV apparatus takes place in a digital form. This ensures the highest possible quality and eliminates noise. XLR-K3M XLR adapter kit : Allows you to connect a microphone / line signal through two XLR / TRS connectors and one 3.5mm mini stereo jack. Postproduction is facilitated by an extensive set of controls. After connecting the adapter to the α7R IV device via the Multi Interface foot with the digital audio interface, the sound transmission takes place in digital form, which ensures the highest possible quality and eliminates noise. The supplied audio extension cord makes it easy to mount the camera on the boom, in the cover or on the handle. The durable UHS-II SD card that allows reading data at up to 277 MB / s is ideal for extreme conditions and improves post-production work. It comes with the file recovery software (for computers with macOS and Windows). MRW-S3 is a high-speed USB hub with UHS-II SD / microSD card reader, USB 3.1 Gen 2 connectors and USB Power Supply (USB Power Delivery) technology with power of up to 100 W. It allows very fast and stable backup to SSD or computer, helping to improve the work.

Sony α7R IV will go on sale in Europe in August 2019. The price of the device was set at about 4 thousand. EUR. The sale of the VG-C4EM holder will start in September 2019, just like the ECM-B1M microphone. Deliveries of the XLR-K3M adapter will start in October 2019.