Which camera and equipment for recording on YouTube for less than 6000 PLN?

Are you planning to start recording on YouTube? I advise you on what to buy best to be able to shoot professional films, while not spending a lot. Our budget for all equipment is PLN 6,000.

Some film specialists will tell you that 10,000 (at least) you have to spend on the camera itself. It's not true. The filming equipment is cheaper all the time and you can already find many interesting offers for much less. Recently, I advised on the purchase of filming equipment up to PLN 3,000. Today we are increasing the budget – we have 6,000 available zł and we must choose the best equipment for recording on YouTube. To work!

The choice of camera for filming is usually between two companies: Sony and Panasonic. In terms of recording on YouTube, I also recommend models of these producers. The Sony A6300 will definitely be a great choice – a very popular model among YouTubers . It is small, light and easy to use. It has a microphone input, slow-motion Full HD 120p mode, 4K 30fps mode and gives the possibility of recording using flat profiles, including S-Log. 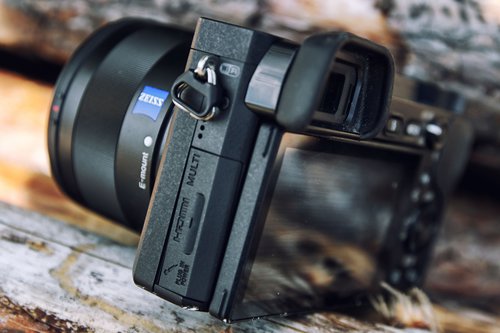 The advantage of the camera is also a very fast autofocus and APS-C matrix, which copes well with high ISO sensitivities . What does it mean? The camera copes well after dark, we can also use darker lenses and in any case we do not have to worry too much about the grain in the picture. Minuses? No screen deflected by 180 degrees, no touch and stabilization of the matrix. A big plus is the price – the camera is already on the market for 3 years, recently its deputy had its premiere, so the equipment can now be purchased for a very reasonable PLN 2550 per body. Panasonic Lumix G80 is a strong competition and equally great camera. The camera is equipped with a Micro 4/3 sensor. The lack of slow-motion mode or film profiles can be regarded as a disadvantage, but the camera will be perfect for vlogging . It has a tilted to the side screen, which is equipped with a touch, as well as a microphone input and high quality 4K 30p mode. It also has a 5-axis stabilization matrix that is missing in the A6300. No doubt it is much better in your hand. These two cameras are usually indicated as competitors, because they are also similar to the price – the Lumix G80 body costs about 2600 PLN. 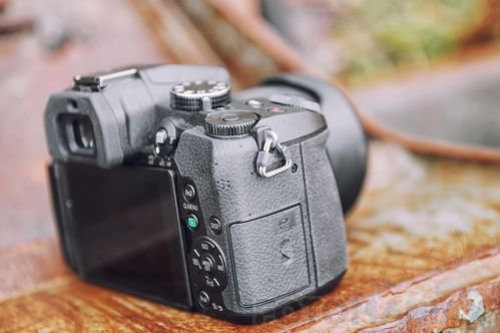 If you do not want to overpay for lenses at the beginning, you can be satisfied with kit glasses. In the version with the Sony A6300 kit lens costs less than 3200 PLN , the same as Panasonic Lumix G80 .

In the last list I recommended, among others, Blue Yeti microphone, which is enough for studio recording. This time I focus on directional microphones mounted to the cameras – the sound thanks to them will be incomparably better than with the built-in microphone. Due to the fact that both of the cameras I propose have microphone inputs, you can safely think about the external microphone. There is no doubt that RODE is the most proven and valued brand in this matter. I recommend RODE VideoMicro . It is a miniature microphone that does not take up much space on the hot shoe and practically does not weigh anything – it's important when using a steadicam or gimbal, because a heavy microphone in the first case will make it difficult to balance, and in the second case – it can hook on the handle. An additional advantage of this model is that it does not require additional battery power supply . The sound quality seems to be acceptable, and its price is very low – is only 200 PLN . 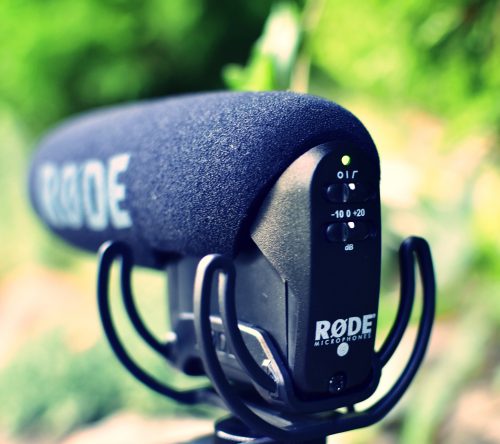 The second model I can recommend is RODE VideoMic Pro . This legendary model among filmmakers is considered one of the best models on the market. It is slightly larger, requires power, but it guarantees the best possible sound quality. For this model we have to pay more, for 600 PLN , but this model is certainly worth the price.

In the case of a lamp for lighting, we do not necessarily have to follow the brand . Quadralite models are certainly prestigious, but much cheaper Yongnuo lamps will also be well-suited. Certainly the cheapest option for lighting is to buy a fluorescent lamp + white umbrella set. Such sets can be found for several dozen zlotys. Similarly, a popular Allegro softbox also works – it is a bulb hidden behind a square tent. However, I recommend ordinary LED lamps that have many advantages: they consume relatively little energy, they do not overheat, they give the possibility to change the color of light (in kelvins), as well as its intensity, and in addition are very light. That's not all – we can usually buy a battery for them – they match the equivalent of some batteries from cameras – so we can use them even without a source of energy. I recommend two Yongnuo models, which in my opinion work well. Yongnuo YN600 Air is a large lamp, which is really a significant source of light. We will get it for less than PLN 300 . 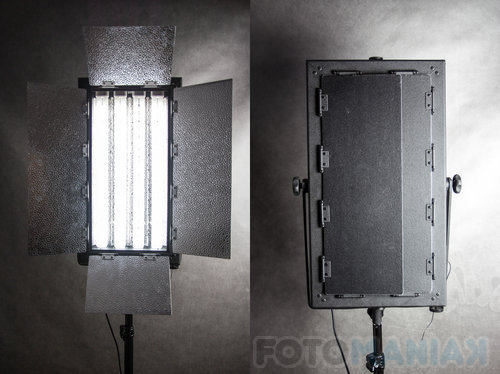 The second model I recommend is Yongnuo YN-600L II . It's a slightly smaller but more advanced model . It has the same features as the cheaper version, but moreover, it has a door with which you can properly direct the light, or a paper clip attach to them a filter (two get in the set). In addition, we can also control the lamp wirelessly using the application on your smartphone. Keep in mind that it is optimal to have two lamps , because one is not enough for a good lighting of the whole plan. In addition to the lamp you need to buy a tripod. In the case of small and low-weight LED lamps, a simple tripod for the flash is enough. We will buy such on Allegro for less than PLN 50 . Therefore, two Yongnuo lamps in cheaper version + 2 tripods costs 700 PLN, and with more expensive lamps – 1,100 PLN.

With a larger budget, you can afford to gimbal, which is the second, after the camera, the most important tool of the contemporary filmmaker. There are many models on the market equipped with various options. At the beginning I recommend a simple and cheap model FeiyuTech a2000, which I tested. With smaller cameras, such as those I recommend, it works very well. 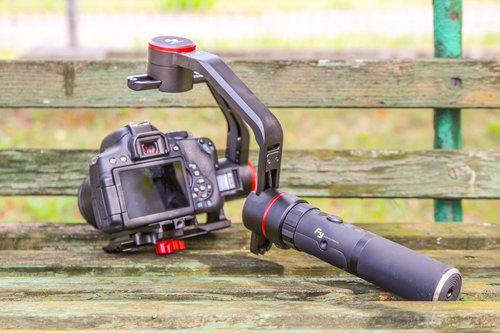 The advantage of this model is its low price, because now we will pay for it less than 1250 PLN . This is very little, considering its capabilities. It is also worth to buy a tripod and here I invariably recommend Velbon Videomate 538 / F , which can be for only PLN 210 . I think that nothing more will be needed to hold the camera. It is worth noting that the gimbal placed on the ground or on a table or bench and placed in the right position can also be used as a tripod, if we set it in the right mode. Anyway, it's worth buying a regular tripod. This is a small cost, and if you want to film yourself in a static pose, it will prove irreplaceable. 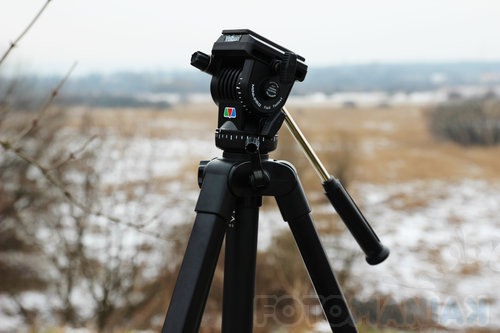 Good equipment for filming for less than 6000 PLN?

In the last guide I wrote about the background for recording, so I will not be doubled this time, because it is not an element worth spending more on, even with a larger budget. Besides, having good lighting can often arrange the space in the room so that the background can be simply unnecessary. Let's now take stock of our expenses. When buying a camera with a lens, regardless of the model, we spend PLN 3200. Choosing a cheaper microphone and cheaper lamps as well as a gimbal and tripod on the account we have the amount of 5460. So there is quite a lot left. The rest of the amount can be spent on spare batteries for the camera, as well as lamps, memory card and photo backpack. Using a different variant to fit in the budget you should choose either more expensive lamps or a more expensive microphone. In the first case the whole set will cost 5960, in the second – 5750 PLN. Personally, I would choose an option with a better microphone and worse lamps. More expensive lamps I recommend to those who really intend to use lighting. Most of you, however, should be cheaper lamps , which will give a lot of light and will work great. As you can see, with not so much money we were able to complete really interesting sets. Undoubtedly, a large difference from the proposals up to PLN 3,000 is made by better cameras that have a significant and direct impact on the quality of films. A gimbal will also bring a lot. The external microphone will guarantee good sound quality and large lamps will provide a bright picture even in a dark apartment.


It's also worth reading!

I hope that you will find something for yourself among the proposals you have selected. I also encourage you to take a look at other blog articles from techManiaK.pl .