Olympus OM-D E-M1X is a mirrorless camera dedicated to professional photographers. It offers efficient matrix stabilization, quad-core, fast processor and improved AF system. Is it enough to meet the demands of professionals?

Olympus OM-D E-M1X is one of the few recently presented models of the manufacturer. The premiere is so interesting that it is also the first ever mirrorless high-end Olympus. The manufacturer's portfolio will now occupy the highest position. But will his options allow professionals to reach him?

The model is designed to be photojournalists, and in their case speed is a key issue. Therefore, within a second we can take 18 photos with full autofocus support. With locked focus, we can take up to 60 photos. The heart of the model is the Live MOS matrix with a resolution of 20.4 megapixels, which should deal with ISO slightly better than in other models – at least this is what the manufacturer assures. The matrix is supported by the latest processor – double, quad-core TruePic VII. 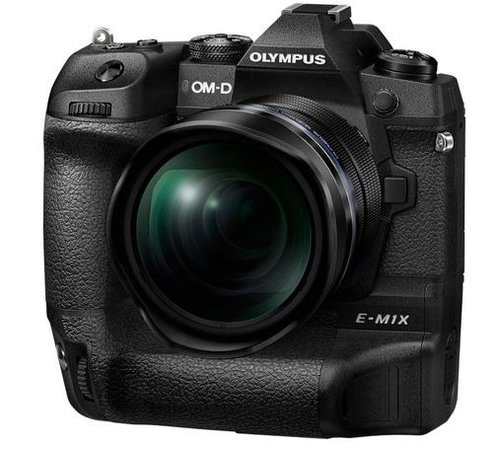 A very interesting feature is the Pro Capture mode. This will save up to 35 RAW images before we press the shutter. This is a great solution when the photographer's reflexes fail. I experienced this myself. Recently, when photographing the Ski Jumping World Cup, I found myself having a moment of inattention that I would be late to catch a jumper coming out of the doorstep. I appreciate how important this function can be. The autofocus system itself has been based on a phase detection system and 121 cross points and should deal with low illumination of -6 EV (with lenses f / 1.2) without any problem. The AF has been designed to be sharpened intelligently. So we can choose custom focus fields, as well as use the intelligent object detection function. In her case, the camera will automatically start to sharpen the elements appearing in the frame, such as cars. Aufotokus is therefore better to analyze what is in the center of the frame to ensure correct sharpness of what is important at the moment.

Olympus designers have created many new solutions in the new model. One of the most interesting is the High Res Shot mode. It works in such a way that when you take a picture, the matrix moves slightly, taking one shot in several frames. Then he combines the frames into one final one, the resolution of which is 50 Mpix. We can take pictures in this way from the hand, and using a tripod we will obtain frames with a resolution of up to 80 Mpix. It's all, of course, in RAW format. 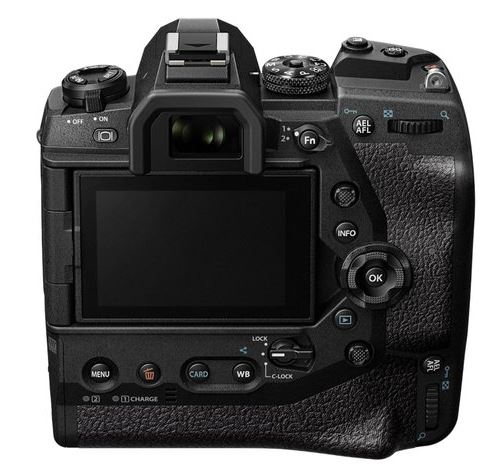 The matrix itself is stabilized, but the stabilization performance has been improved. This is up to 7.5 EV . Such a result means that in the vast majority of situations we will be able to take photos with no problem. In turn, in the film mode, such stabilization will also provide extremely stable frames and give the possibility of walking with the camera and obtaining smooth motion. Also new is the simulation mode of the ND filter, operating in the ND2-ND32 range, which will replace traditional filters. In turn, flicker scanning technology is to be responsible for eliminating artefacts that arise when we photograph in artificial lighting using an electronic shutter. The problem with flickering is probably known to anyone who has had to use short times in artificial lighting. The producer also guarantees that the lifetime of the shutter, thanks to the improved heat removal system, is to increase to 400,000. cycles.

As we know, recently more and more mirrorless producers began to take seriously the film mode. This is also the way Olympus goes. Its camera allows you to shoot not only in the standard 4K UHD mode (3840 x 2160 px) at 30 fps, but also in Cinema 4K mode (4096 x 2160 px) , where the speed is 24 frames. In turn, in Full HD quality we can record slow motion video at 120 frames per second. 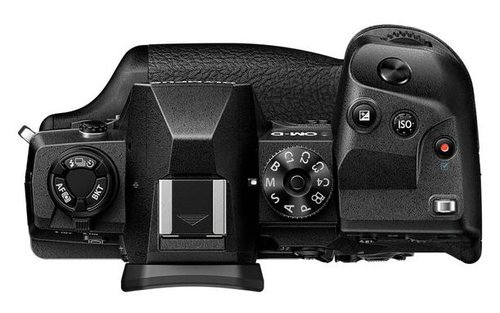 Among the additional options there will be even the focus of peaking, necessary in the manual sharpening. For the first time in the camera, the OM-Log logarithmic profile also appeared. The stabilization itself has also been adapted to filming and offers three modes of action designed to give the best results in film mode.

All buttons and levers have been redesigned (their layout, shape, height) and provide even more intuitive operation, and also allow you to photograph without taking your eyes off the viewfinder (new optical construction and the largest magnification 0.83 x – equivalent 35 mm). The multi-selector has been placed on both grips, so that users can quickly and easily move the focus areas at any time. The new lock lever C allows locking control elements in a vertical position, as well as blocking only selected control elements. The body has been sealed against dust or splashes. Among the inputs you will find, among others, microphone and headphone, as well as the input on the remote control cable. The grip has two batteries that will allow you to take up to 2580 photos on a single charge. There were also two entries for SD memory cards , as well as a GPS module and sensors, such as a thermometer or a compass. 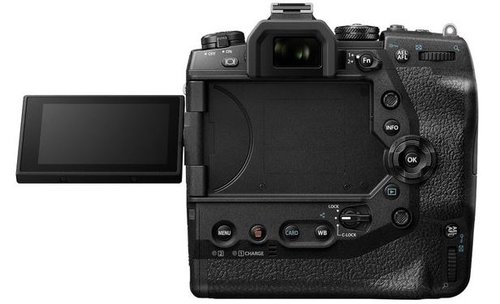 The screen of the camera can be rotated in any way, its size is up to 3.2 inches , and there is also no touch operation. We will be able to set the focus not only on the screen, but also using the AF joystick. The whole body with two batteries and memory cards will weigh less than a kilogram.

The new Olympus bezlusterkowce is certainly a well-designed model . The decisive plus of the camera is a whole lot of interesting technological solutions that many of us have been waiting for. The possibility of taking portraits with high resolution, inteligenty autofokus, the function of taking a series of photos before pressing the shutter, eliminating flickering, electronic filter ND. Some of these functions have already appeared in cheaper models, although they were in vain to look for in professional ones, while others are completely new. All these elements promise to be really interesting and you can see that the constructors listen to users and know what they missed. On the other hand, the Micro 4/3 sensor is still the heart of the camera. Is this enough for professional applications? In many cases, no. For example, when we need to raise the ISO to a higher level, when we require high detail not only in the portrait. Olympus OM-D E-M1X will cost 3 thousand. dollars , or in our market, we'll probably get it for over 12,000. Golden. The camera will hit the market at the end of February. We are already waiting for the possibility of testing it and checking if the professional will be satisfied with this camera.